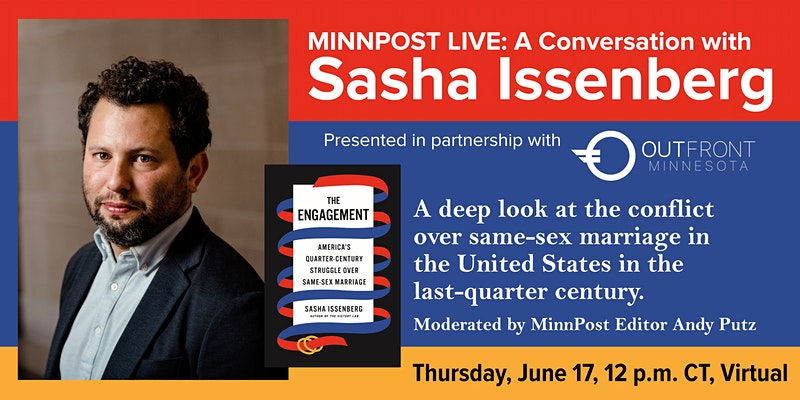 A deep look at the conflict over same-sex marriage in the United States in the last-quarter century.

Author Sasha Issenberg will discuss his new book, “The Engagement,” which tells the expansive story of the struggle over same-sex marriage in the United States, from the first legal same-sex weddings in Massachusetts to the epic face-off over California’s Proposition 8 and, finally, to several landmark Supreme Court decisions. MinnPost Editor Andy Putz will moderate the conversation.

Sasha Issenberg is the author of three previous books, on topics ranging from the global sushi business to medical tourism and the science of political campaigns. He has covered elections for outlets like The Boston Globe, Slate, Bloomberg, Businessweek, and The Recount. He is the Washington correspondent for Monocle, and has also written for New York magazine, The New York Times Magazine, and George, where he served as a contributing editor. He teaches in the political science department at UCLA.

This event is presented by OutFront Minnesota, whose mission is to create a state where lesbian, gay, bisexual, transgender, and queer people are free to be who they are, love who they love, and live without fear of violence, harassment or discrimination.

For those interested in purchasing a copy of “The Engagement: America’s Quarter-Century Struggle Over Same-Sex Marriage,” you can do so from Magers & Quinn.